ICSI (intracytoplasmic sperm injection) has revolutionized IVF because it has allowed us to offer treatment to men for whom no treatment was available. Not only will it help couples in whom the male has just a few, barely swimming sperm in the ejaculate, but thanks to advanced techniques for aspirating sperm from the ductal system and techniques to harvest sperm from testicular biopsies, it can also aid men who ejaculate no sperm. These sperm-harvesting techniques include MESA (microsurgical epididymal sperm aspiration) and PESA (percutaneous epididymal sperm aspiration), an office procedure where sperm can be obtained by passing a tiny needle through the skin into the epididymis. Testicular sperm extraction (TESE) is also an office procedure, now sometimes done with a large biopsy needle under local anesthesia, rather than being done as a full surgical biopsy, but sperm are not as reliably obtained.

This new micromanipulation treatment, which was developed in Belgium and introduced into the United States in 1993, evolved from previous attempts at micromanipulation such as PZD (partial zona dissection) and SUZI (subzonal insertion), which did not enjoy the success that ICSI has attained.

The IVF cycle is conducted exactly in the manner described above with a very few exceptions. After the eggs are retrieved, instead of mixing the sperm with the egg, the embryologist utilizes a thin glass pipette to immobilize the sperm, sucks it up into the pipette, and then injects it directly into the egg's cytoplasm. Since the egg is the size of a pinpoint, it is a sophisticated technique requiring a high-powered microscope, tiny glass pipettes, and instruments that translate hand movements into extremely fine movements of the pipettes.

In the 2007 SART/CDC report, 63% of ART cases involved ICSI. The success rate for IVF with ICSI is about the same as for IVF, indicating that the manipulation has very little effect on the egg. However, since the female partners of these men are often reproductively normal, there may be some small adverse effect, also reflected in reports of slightly reduced embryo quality with ICSI. Most data indicates similar rates of congenital abnormalities with the general population and IVF without ICSI, although some reports suggest a minor increase of chromosomal anomalies, many of which are related to the man's genetics or his sperm, rather than the procedure itself. Because of these concerns, prenatal genetic testing with a fetal karyotype may be suggested for ICSI pregnancies. Recently, there have been concerns about a higher rate of some very rare abnormalities, which may be associated with IVF and ICSI, specifically Beckwith-Wiedemann syndrome, which includes kidney problems, low blood sugar and an increased risk of childhood tumors.

In a proportion of men (10 to 20 percent) with very low or absent sperm in the ejaculate, the man may have a chromosome defect or a genetic defect not visible on routine chromosome analysis (Y chromosome microdeletion) that could pass on a similar problem with infertility to male offspring. Rarely, such a chromosome defect could cause a serious abnormality in the offspring. Therefore we suggest a pre-cycle karyotype for men with fewer than 5-10 million sperm per ml in the ejaculate. In men with congenital absence of the vas deferens, one can assume the male is a carrier for cystic fibrosis (CF). Since such men can have a mutation not screened for in the standard CF panel, it is recommended to test the female partner. If she is a carrier, the couple could elect to have their embryos tested for CF by testing a sample of amniotic fluid and aborting a CF fetus, or now by preimplantation genetic diagnosis (PGD) where a cell is analyzed from each embryo and only unaffected embryos are transferred. When PGS or PGD is anticipated, ICSI is performed to avoid contamination of the embryo with sperm DNA. 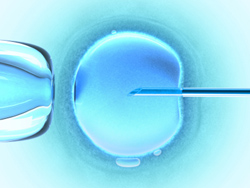 As depicted in the image to the right, after the eggs are retrieved, instead of mixing the sperm with the egg, the embryologist has utilized a thin glass pipette to immobilize a slightly mobile sperm, which you see on the right. On the left you see an egg stabilized by a holding pipette. The thin pipette on the right is introduced into the cytoplasm. A small amount of cytoplasm is sucked up into the pipette to assure that the pipette has penetrated and then the sperm is injected into the egg.